A few days in West Virginia 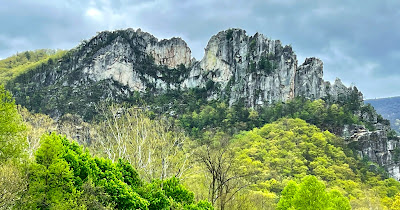 As spring approached this year I set some dates to go visit my friends at Spruce Knob, we all know the weather can’t be bad for three days right?! A needed break from work and an excuse to hunt down the amazing warblers that move through the spruce trees every year at elevation was enough for me to ignore the forecast and I’m glad I did.  I showed up on Wednesday afternoon and worked on a few projects with the Experience Learning team that required IT help then after that was done it was all about walking the property to see what gems I would uncover this time around. The magical place never stops amazing me and this trip was no different.  The fields had been cut last year shorter than before (I don’t like ‘em all cut that short!) and there is now a more visible marsh which to my surprise had two solitary sandpipers. Crazy to this think that shore birds would be in the mountains of West Virginia.  Later in the day the clouds rolled in and I got my yurt set for the night and camera all
Post a Comment
Read more
April 06, 2020

Time to talk about slowing down.  This last bunch of weeks COVID has given us a lot of time for reflection and in a lot of cases no spaces to do so outside the homes. This leads nature photographers to super local or really remote private locations. In my case the majority of my time has been taking photos at the bird feeder behind my house. I sure hope everyone in enjoying the photos I have been taking and shared on social media and here on my photo website.
Post a Comment
Location: Fairfax, VA, USA
Read more

The Almost Heaven Star Party ( AHSP ) was an idea that I got excited about when I signed up with  NOVAC  back a couple of months ago.  I then got lost buying my telescope and quickly in passing talked to Erin about signing up for the AHSP.  After a few days of talking about it I had the green light! I pretty much after that put it in the back of my mind as I had my telescope arriving and WOW I had to figure out how the damn thing worked!  I made a call for help and was directed to Allan Mayer as my "mentor", he sent me many great and clear posts based on questions I asked and didn't for that mater on what to do and not based on his vast experience.  After a weekend at Camp Highroad and a couple times out during the weeks before I was ready for my trip to Spruce Knob or so I thought... Starting out I left for AHSP around noon on Friday and after stopping a couple times to pick up a few items and gas the car I was on my way. No speed traps but I did give money to the firema
Post a Comment
Location: Spruce Knob Mountain Center
Read more